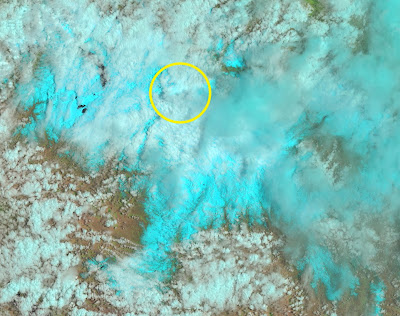 This is the most extensive snowcover I've seen on a Landsat image of the Quelccaya area. Looking through a layer of thin clouds, Sibinacocha is barely visible in the upper left; the yellow circle tightly circumscribes the ice cap, which isn't visible here. This image was acquired on 26 October.

A context for the event is provided by snowfall telemetry from the summit AWS, via GOES telemetry. The figure below shows daily snow surface height at the station, with each year in a different color. The lowest horizontal dotted line is the zero reference, or the lowest height reached each year (defined here as June-May), and the upper horizontal line is 1 meter of accumulation. Accumulation for 2013-14 is shown in white, depicting a fairly-average surface height minimum date in early October. The snowfall event captured in the Landsat image occurred during the straight, steep increase in the white line, and accumulation by month's end was 2-3 times the mean (or median) since 2004. [Note that the straightness of the line for 8 days cannot be taken to indicate linear accumulation. Rather, heavy snowfall resulted in weak transmissions and intermittent loss of telemetry.] 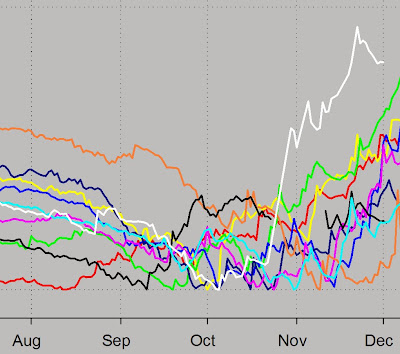 Below is another Cordillera Vilcanota scene, this one acquired 11 November 2013 by Landsat 8, after the snowfall event (Landsat Scene Identifier:  LC80030702013315LGN00). Snowcover off the glaciers is somewhat diminished, because higher air temperature and increased clouds make this time of year warmer - and snow melts. Snowcover shown here is primarily at elevations above ~5,000 m. Compare this with the seasonal cycle for 1998 depicted in the right-hand margin of this page, or available here.

Detail of the ice cap and surrounding terrain is shown in the final image, cropped from the same scene. 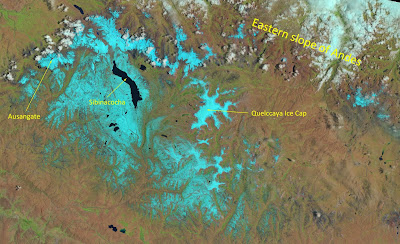 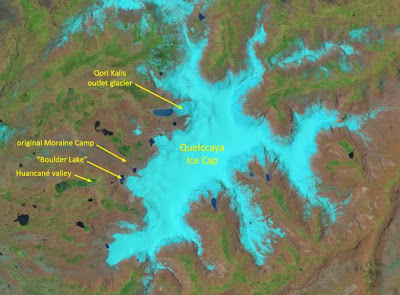