During the month of May, snow depth at Quelccaya summit has increased in about half of all years since 2004. By the beginning of June the dry season has typically begun, and until early August, snowfall is only associated with occasional, relatively-brief winter precipitation events.

This update will be the last on accumulation until after our fieldwork, when among other activities we will measure density and determine the water equivalent accumulation for 2012-13. This will provide a more accurate measure of precipitation, and put the accumulation season into a proper longer-term context. Hopefully, we will encounter easy digging!
Posted by admin at 10:37 AM No comments: 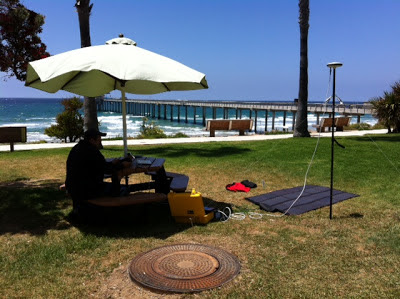 A component of our forthcoming 2013 fieldwork will involve high-accuracy GPS measurements, uploading data to Scripps for processing, downloading calculated coordinates, and then re-occupying dozens of points comprising a strain net on the glacier which was established and surveyed in 1983. In preparation, Dave Chadwell & Carsten Braun are in San Diego this week testing GPS receivers, a BGAN terminal, laptops, charging systems, and Iridium phones. Multiple redundancies will hopefully insure that things go smoothly on the ice cap!
Posted by admin at 3:18 PM No comments: