In June of 2007 the Quelccaya AWS was supplemented by instrumentation compatible with NOAA’s Climate Reference Network (CRN). As nicely documented on the CRN website, several highly-accurate air temperature sensors housed within a continuously-ventilated radiation shield provide what is likely the best air temperature measurement possible in the extreme environment of the ice cap. (The link above now has comprehensive access to all CRN publications.)

Further information on Quelccaya temperature measurements is available here, along with access to the first 3 years of measurements.

Processing of the full 2007-13 temperature record from these sensors has just been completed, and access will be provided early next month. This record was assembled from 5-min averages based on 3-4 PRT sensors, quality controlled following CRN protocols (see Palecki & Groisman, 2011).

[UPDATE 3/25:  A complete record of quality-controlled hourly air temperatures for July 2007-June 2009 are available here, as well as the accompanying metadata. The full 2007-13 period has been processed, yet these are not yet available due to insufficient fan speed during early-morning hours through a portion of this period. Maximum daily temperatures were largely unaffected and this series will be available soon. Thanks for your patience.] 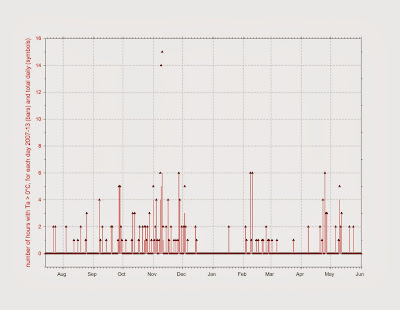 A sneak preview of one aspect of the new record is provided above, illustrating how melt energy is far from uniform through the year, or even through the accumulation season. The bar chart shows the number of hours each day in which the hourly mean temperature was above freezing, for each of the 6 years; also shown (as symbols) are the total number of hours above freezing - over 6 years - for each date. Although air temperature rises above freezing during only 0.42% of all hours, the associated melt is having a profound impact on the ice core record!