We returned recently from an exciting 19 days of fieldwork at Quelccaya. The expedition was timed to coincide with the conclusion of the wet season following the very strong 2015-16 El Niño, and we gained considerable new information. Specific objectives related to this anomalous year included:  AWS data recovery and annual instrument maintenance; snowpit measurements and sampling for chemical analyses; and both GPS mass balance and ice margin measurements. We also had an opportunity - which for over a decade was only a dream - to spend time learning about and documenting breeding behavior of the White-winged Diuca-Finch. This species is among the highest-elevation nesting birds of the Western Hemisphere, and is the only species known to build nests on glaciers (see here for background, soon to be updated); our recent observations yielded a wealth of new understandings. As always, Vicencio Expeditions provided fantastic logistical support, allowing our team of 5 to work safely and efficiently. Below is a quick collection of images documenting some of our observations.

Fig. 1 (above):  Quelccaya Ice Cap's western margin, at which our group spent 2+ weeks during April and early May. Note that the transient snowline is already at nearly 5500 m, due to low accumulation and warmth during the strong 2015-16 El Niño. Qori Kalis outlet glacier is partially visible towards the left side of the image; our efforts on this trip were concentrated at the outlet glacier just right of center. 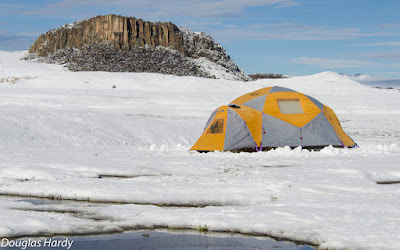 Fig. 2:  Alipampa Camp at the end of the road (4765 m), where we spent 2 nights acclimatizing. Snowfall overnight was somewhat unexpected. 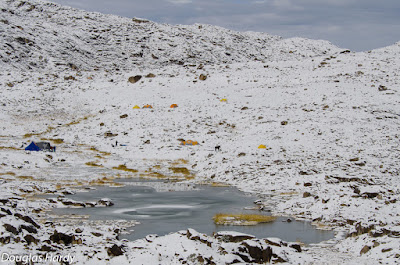 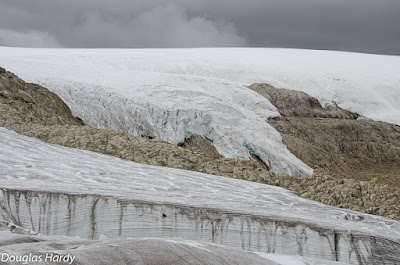 Fig. 4:  Quelccaya margin just south of the figure 1 panorama. Tiny patches of new snow are visible on the otherwise-dark ablation zone of the lower ice tongue. This low-albedo surface absorbs roughly half of the solar radiation incident upon it on sunny days, becoming a maze of tiny meltwater runoff channels. 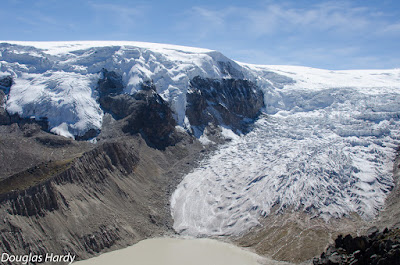 Fig. 5:  Qori Kalis outlet glacier, which has thinned dramatically in recent years - yet still extends into the lake. 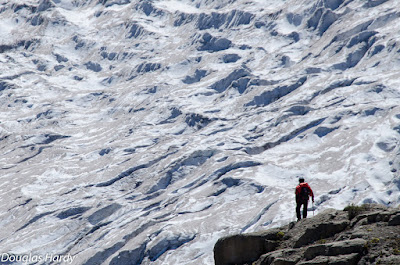 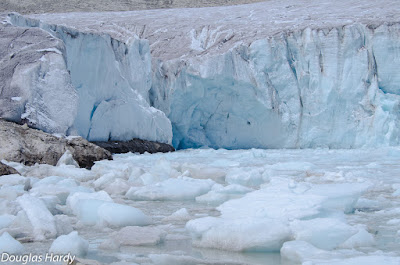 Fig. 7:  After several snowy days initially, high pressure built in over Quelccaya, resulting in extensive melting at all elevations on the glacier. Meltwater production led to hours of repeated calving at this ice face, filling part of the lake with ice fragments. 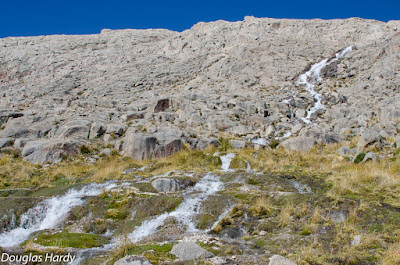 Fig. 8:  Meltwater runoff from the ice margin (above rocks in this view) brought greater discharge to many streams than we had seen previously. 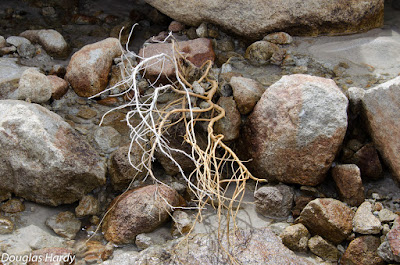 Fig. 9:  Evidence from one of the runoff channels of high discharge during the wet season; these are roots from a plant which had become established near the stream. 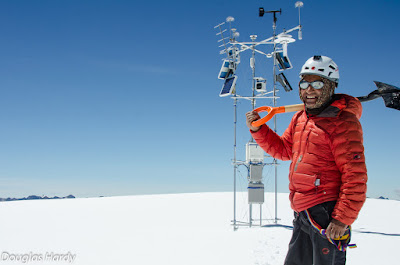 Fig. 10:  At the summit AWS, Felix is always eager to help. For the past 12 years, the station's enclosures have been buried upon our dry-season arrival. During the current El Niño event, accumulation was much lower than normal. Indeed, at the end of April - with potentially 6-7 months of ablation ahead before the next wet season - accumulation (w.e.) was less than any other year of the 2003 ice core record since at least the late-19th century*! We will soon provide more details of this extreme situation.

[*Caveats to this statement are required. Current accumulation is based on the amount present on 2 May 2016, above the 2015 dry season surface (water equivalence). This may under-estimate accumulation if a greater-than-normal proportion of precipitation was in the form of rain and percolated completely through the annual increment. Under-estimation could also occur if a greater proportion of meltwater percolated completely through, rather than refreezing within 2015-16 accumulation. However, the accumulation present in early May has always been less than that preserved when the subsequent wet season begins (due, for example, to dry-season sublimation).] 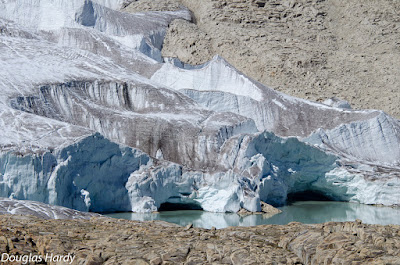 Fig. 11:  The outlet glacier just above our camp, where a major focus of the most-recent expedition was to study the breeding of Diuca speculifera or White-winged Diuca-Finch - the "Glacier Bird of the Andes". 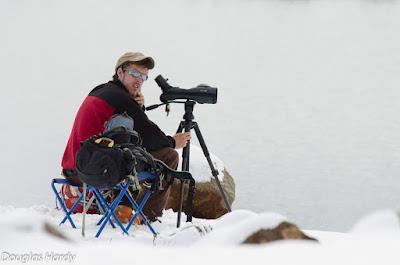 Fig. 13:  Locating active nests of any bird species requires patience and astute observation skills. Extra motivation is required to do so in the snow at elevations above 5000 meters. 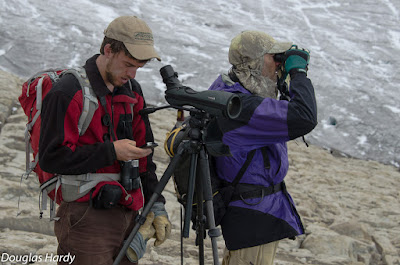 Fig. 14:  Two key members of the nest-searching team. All bird observations throughout the entire expedition are available in eBird (~50 spp. from >4800 m). 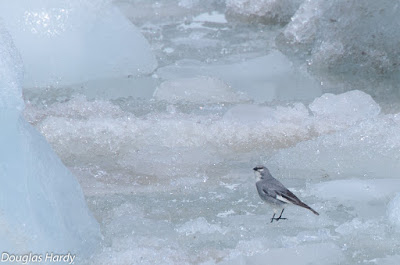 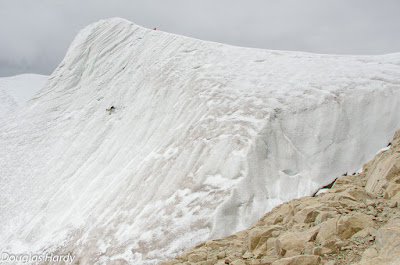 Fig. 16:  At the site of one diuca nest, high on a 60-meter cliff face. Ideally - as in this case - the birds choose nest sites which are safe from predation (esp. Fox, Pseudalopex culpaeus and Mountain Caracara, Phalcoboenus megalopterus) and offer thermal protection (esp. heat loss by longwave radiation). The actual nest site here is ~2 m to the right of the person. 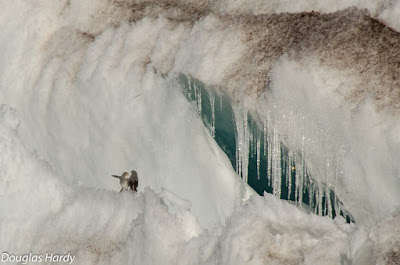 Fig. 17:  A juvenile diuca begging for food from a parent. 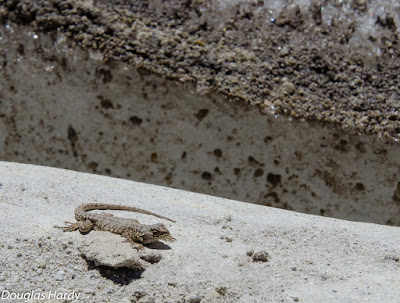 Fig. 18:  Tremendous biodiversity exists in Cordillera Vilcanota. Here a lizard basks in the sun adjacent to glacier ice (background), an atypical environment for most lizard species. 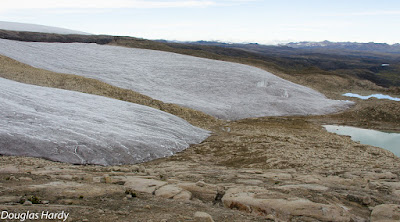 Fig. 19:  Quelccaya margin just south of the section we concentrated on this time. A decade ago this margin was also a steep cliff, with numerous diuca nests every year. However, over the past 30 years our measurements with Dave Chadwell (Scripps & UCSD) document that the glacier in this area has thinned by more than 60 meters (paper in review). Where will diucas nest in the future, as recession of the ice cap accelerates and suitable locations disappear? 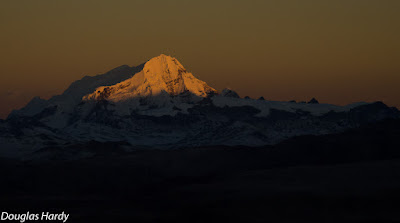