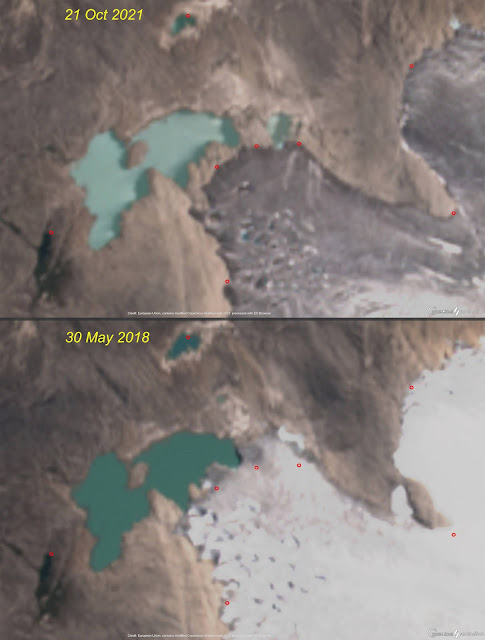 Oh, how I miss Quelccaya! It has been three years since we've been able to do fieldwork at Quelccaya Ice Cap, a result of removing the AWS and the COVID-19 pandemic. Nonetheless, satellite imagery provides a glimpse at changes continuing at the glacier.


The image pair above illustrates one portion of the ice cap margin as it appeared last week (upper), and just prior to our last visit, in 2018 (lower). The red dots are co-registered to provide a perspective on examples of change over the three years. As in the past, ice recession has not been uniform along the margin. Retreat is especially dramatic at the formerly proglacial lake Morojanicocha. Collaborator Gustavo Valdivia visited this area in September, was able to walk entirely around the lake, remarking that it is "incredible how fast the ice is retreating".

Also note the change in waterlevel at the lake at the top of both images. The obvious drop may reflect seasonal lowering during the June - September dry season, but may also be a response to longer-term hydrological changes associated with ice retreat.

Other environmental changes at Quelccaya are less easy to interpret from imagery at this resolution, such as the magnitude of glacier thinning. Also, changes in the volume and routing of meltwater runoff from the glacier over time are difficult to assess from imagery, due to the combination of seasonal and diurnal variability, as well as the five-day image acquisition interval.

The landscape around the ice cap supports tremendous biodiversity, due largely to meltwater storage in down-valley lakes and wetlands (bofedales). As the volume of runoff decreases, the many species dependent upon the water are needing to adapt or relocate.

Another change with biotic effects is the glacier-surface morphology, which we have observed over the past two decades. Quelccaya is where breeding by the world's only glacier-nesting bird species has been observed, as described here, here, and here. These Glacier Finch (Idiopsar speculifer, formerly known as White-winged Diuca Finch, Diuca speculifera) will only build nests in crevasses and very steep, fissured margins - both of which tend to disappear as the glacier has thinned and retreated.

We remain optimistic about returning in the next few years to this amazing place, to document and measure changes since our last visit!

These two Sentinel-2 images show changes over 4.5 years at a portion of Quelccaya's western margin. The view includes Lonnie Thompson's Base Camp (lower left) for fieldwork since the 1970s, and the marginal lake we refer to as Morojanicocha.

Some visible differences are seasonal, such as the higher water levels in May and lower-albedo ice in the ablation zone during November (also with less snowcover).

Most notable is ongoing retreat of the ice margin, particularly towards the bottom of the image where the ice is thinner. Ice is no longer calving into the lake, and our colleague Gustavo Valdivia reports that it is now possible to walk entirely around it on rock.

The importance of fieldwork


Since first visiting Quelccaya in 2003, the objective of our work has been to accurately establish the summit climate, and quantitatively document how climate is recorded by the glacier - illuminating what we can learn about climate from ice cores. These efforts are documented in publications, with more still in preparation.

Working at high elevation on the glacier requires a bit of physical exertion (e.g., digging snowpits, wrestling with AWS tower extensions), as well as mental concentration (e.g., electrical wiring, datalogger programming). In spite of these requirements - or perhaps due to them - we also spend time at Quelccaya simply making observations, of both abiotic and biotic features and processes. These 'distractions' were often fascinating, including ice caves, streamflow and sediment transport, atmospheric convection, and abundant wildlife.

Our avian observations revealed behaviors previously unknown, some of which we have published (see here, here, and here), while others remain only partially understood. Another observation remained only in notes and photographs until recently, involving a fly. Since 2004, we encountered a large fly species at the AWS, typically clustered beneath the snow surface in proximity to the tower tubing and buried instrument enclosures. During transition-season visits in April and October 2014, we observed the flies on the snow surface at our moraine camp (5,200 m), crawling around in our tents, and being eaten by birds.

We posted photographs of this fly species on iNaturalist, where it remained unidentified for five years. In November, Russian entomologist Dmitry Gavryushin observed the report and took interest. He was able to identify the crane fly to species, based on a speciman from Bolivia described by prominent crane fly taxonomist Charles P. Alexander, who was affiliated with the UMass Entomology Department from 1922-1959. The coincidences continue, for the type locality for Dicranomyia (Dicranomyia) perexcelsior (Alexander) is Chacaltaya Glacier in the Cordillera Real of Bolivia. This is where Niethammer (1953) first described an association between Andean glaciers and our "Glacier Bird" (White-winged Diuca Finch; Idiopsar speculifera).

Our Quelccaya crane flies are the highest-elevation observations from anywhere in the world, which came to the attention of Pjotr Oosterbroek at the Naturalis Biodiversity Center in The Netherlands. Pjotr's enthusiasm and initiative drew in Christophe Dufour from the Muséum d’histoire naturelle in Neuchâtel, Switzerland, and resulted in our latest publication, on high-elevation crane flies. Working with these two was an absolute pleasure.

Our experience at Quelccaya demonstrates that casual observations from seldom-visited, extreme environments are often invaluable. When making them outside of one's field of expertise, one can never know just how important they might be. This is especially true during the rapid environmental changes underway. Chacaltaya Glacier, for example, no longer exists; no one will ever again observe crane flies or Glacier Birds there. Sadly, this will likely also be the case at Quelccaya before the end of the century (Yarleque et al., 2018).
Posted by admin at 3:25 PM 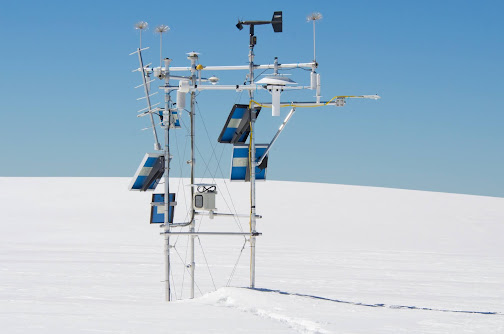 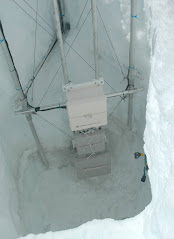 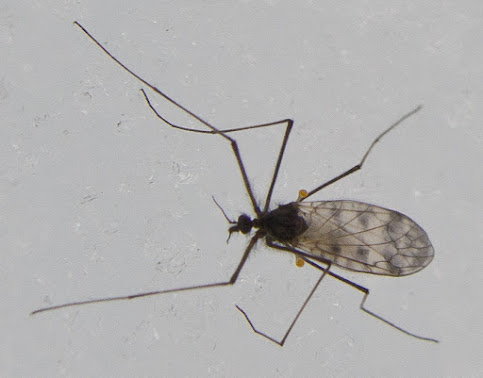 A new index (of sorts) has been compiled to better organize Quelccaya images depicting the weather station, snowpit measurements and sampling, as well as other aspects of fieldwork:  Quelccaya Gallery.

Links to images of birds living and nesting around & on the glacier are here.
Posted by admin at 9:15 AM 2 comments: 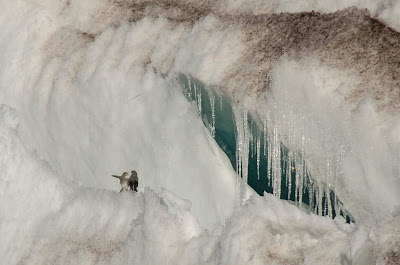 Important scientific information has been emerging from research at Quelccaya Ice Cap for nearly 50 years, from ice core records, glacial geology studies, and meteorological measurements. In recent years, research has also yielded new biological findings, revealing the importance of glaciers to the lives of birds in the High Andes.

We published a paper in 2008 documenting nesting on glacier ice at Quelccaya by White-winged Diuca-Finches. Diucas are a medium-size tanager species found in the High Andes of Peru, Bolivia, and Chile, and prior to our new publication were the only bird known to routinely build nests directly on glacier ice. This species is also among the highest-elevation nesting species in the world – to at least 5400 meters (18,000 feet) – despite an environment with average temperatures below freezing, high winds, frequent snowfall, and intense solar radiation.

Our paper in the latest Wilson Journal of Ornithology provides new details on this unique behavior. Ten years of additional observations include fieldwork at Quelccaya outside the core dry season, culminating in 2 weeks at the glacier in 2016 filming a Diuca nest with 2 chicks. Besides observations of multiple active nests, the paper also documents glacier nesting by another species, the White-fronted Ground-Tyrant, and describes nocturnal roosting within or under a glacier by 5 different species. The publication includes an online Supplement (also available here) containing additional images, and links to the BBC/PBS film.

Nesting and roosting on glaciers are adaptations to the harsh environment at high elevations in the Andes, as cavities within the ice provide both a protected microclimate and protection from predators. Are glaciers important to other species, elsewhere? What happens when the glaciers are gone, victims of climate change?

Andean glaciers are shrinking rapidly, and even the largest are likely to disappear this century. Although undocumented until only 10 years ago, the lives of several bird species appear to be dependent upon these glaciers. Their loss may have a direct, negative effect on biodiversity of the High Andes - in addition to other impacts, such as water resources.
Posted by admin at 11:59 AM

The second half of September at Quelccaya is typically characterized by increasing snowfall, as the dry season concludes. Cloudiness increases rapidly at this time of year, as evidenced and measured by sharply increasing longwave radiation receipt. Air temperature continues a steady increase into November.

These aspects of Quelccaya climate are illustrated by the 2 images below, acquired by Senitinel-2 only 5 days apart. On 27 September (upper image), fresh snow is evident at higher elevations of the Vilcanota, particularly on glaciers and eastern portions of this scene. By 2 October (through high thin clouds), fresh snow had ablated from the landscape (middle image). Lower elevations of Quelccaya Ice Cap also become snow-free, revealing the transient snowline (also see lower image).

Further evidence of this seasonal change in climate is provided by the lower image - an enlargement of yesterday's image - showing the apparent disappearance of ice cover from a marginal lake (circled). In July this ice was thick enough to support a person walking across the lake. 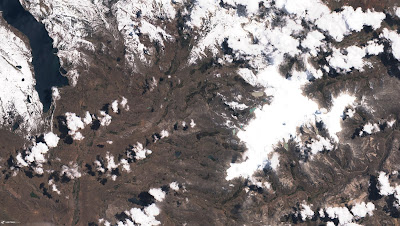 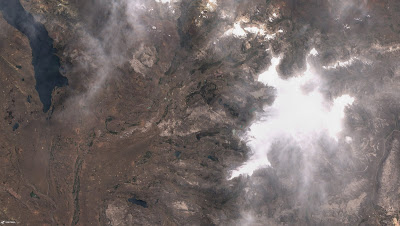 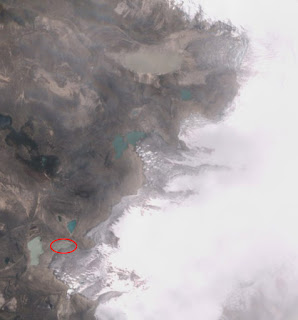