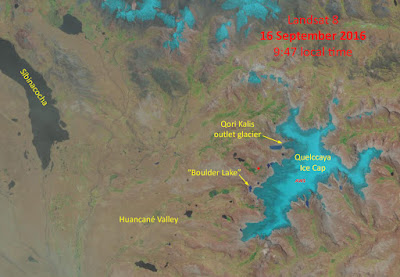 The transient snowline at Quelccaya reached ~5600 m in mid-September, as illustrated on the Landsat 8 image above. Had the wet season begun by then, only the upper ~100 m of the ice cap would have seen net accumulation for the El Niño year 2016. However, it is likely that ablation continued after the time of this image.

A subsequent Landsat image was acquired on 2 October. New snowcover is visible south of Quelccaya, but cloud cover obscures the ice cap. So, we must wait for the next few satellite passes to see whether the snowline continues rising - or if the new wet season has begun. The first opportunity for this assessment will be in ~10 days.

This situation demonstrates a difficulty of mapping minimum snowcover extent from satellites. Thin high clouds (as in this image) or scattered cumulus clouds still allow snowcover assessment, yet cloud cover thick enough to obscure the ground prevents mapping. As a result, the spatial extent of accumulation cannot be accurately determined by remote sensing some years.