Ready to check in on El Niño 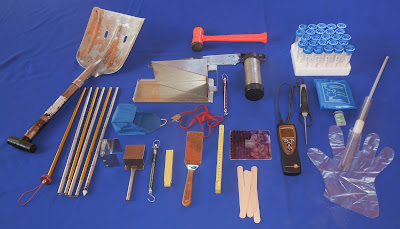 Snow and sampling tools are packed and ready to help assess 2015-16 El Niño event impact to date at Quelccaya. We will be at the glacier until early May, playing in the snow and recovering frozen samples, Also planned are retrieval of AWS measurements, servicing the station, and doing a geodetic mass balance survey. Some exciting ecology research is part of the program; stay tuned for further details!
Posted by admin at 11:12 PM No comments: 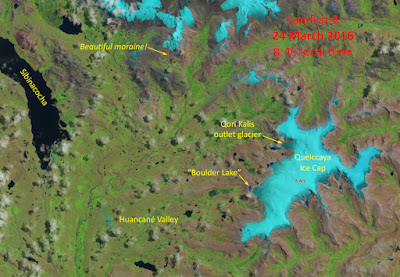 Snow accumulation at Quelccaya Ice Cap seems to have reached a maximum in early February this year. Despite a couple minor snowfall events, snow depth at the summit early in April has already decreased by about one-third, reaching 29% of the median for 4 April (based on 2005-15). For perspective, snow depth is now less than half that of the previous early-April minimum.

The water equivalence (w.e.) of 2015-16 accumulation to date is not known, and won't be until a density profile is made. Although it is possible that the snowpack w.e. is not as anomalous as depth, due to melting and even rain, the correlation between depth and w.e. at Quelccaya summit is typically strong.

Additional snow accumulation after early April is not likely, as the conclusion of the wet season, or the "snow-accumulation decay date" (Hurley et al., 2015) occurs between by mid-March and mid-May. And even in years when the wet season continues into May, the rate of accumulation generally decreases substantially.

The image above illustrates anomalously low snowfall of the 2015-16 El Niño year. This is a nearly cloud-free view from 24 March, depicting the seasonally-green wetlands (bofedales) and the numerous lakes impounded behind moraines - many of which formed within recent decades. A transient snowline near the margin delineates old glacier ice of the ablation zone and this year's accumulation. At least one other snowline is faintly visible, particularly on the west side, which may represent ablation-zone ice with a thin cover of 2015-16 snow.

Comparing imagery of snowcover extent from year to year on a fixed date is risky. Only by observing the minimum extent of snow cover prior to the next wet season can one assess accumulation in a simple, meaningful way via satellite. During this important El Niño year we will continue to monitor snowcover.

In the meantime, fieldwork will be undertaken at Quelccaya during April and May to assess snowcover depth along transects, measure density, and obtain samples for comprehensive chemical and isotopic analysis. Measurements at the AWS and time-lapse images will be recovered which will help us better understand how this strong El Niño is being recorded at Quelccaya.
Posted by admin at 1:20 PM No comments: