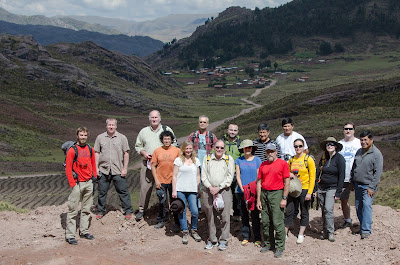 Acclimatization has gone well, and our next round of fieldwork is about to commence. Excitement is high among our group of scientists, journalists, guides and drivers pictured above, representing 7 countries of origin. Our destination today was Cerro Wanakauri (see track here). At Quelccaya, group members this year will be pursuing a variety of objectives, from anthropology to snow chemistry to artistic photography.
Posted by admin at 4:20 PM No comments: 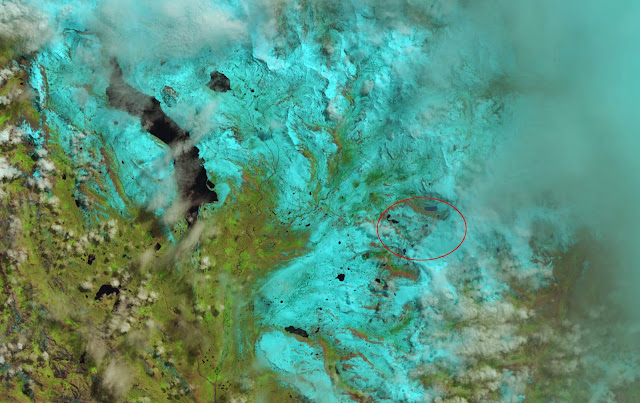 After modest snow accumulation during February and March, April 2015 snowfall at Quelccaya was more typical of the core wet season months. For our 11-year period of record, the median height change during April is 12 cm. However, this year's April snowfall was 460 percent of the median, at 55 cm. This is nearly three times that of the next "snowiest" April (2007) and in 2 of the 11 years there was net ablation during April.

Change in surface height only equate with accumulation in water equivalent if densities are equal, yet our experience indicates that snow density is quite consistent at Quelccaya. Next month we will be on the ice cap to measure density profiles, among other tasks, and will have a more accurate measure of accumulation.

The Landsat image above (23 April) illustrates widespread snowcover on the landscape around Quelccaya above ~4,700 m. Our fieldwork beginning later this month will focus on the area within the red ellipse shown on the image, primarily above 5,200 m. Credit:  USGS EROS data center

[UPDATE 5/20:  Accumulation continues! As of 18 May, a mid-month snowy interval was underway, bringing total accumulation for 2014-15 to exactly the median for the date, at 2.05 meters. One-third of the wet-season snowfall has occurred since the end of March, which is unusually late to have so much snow. We will be on the glacier at the end of the month, and will provide an update towards the end of June.]
Posted by admin at 10:06 PM 1 comment: