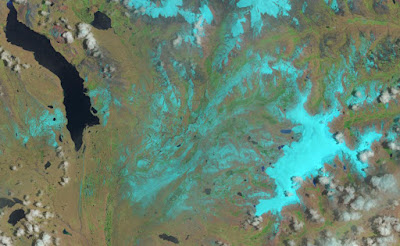 New accumulation is underway at Quelccaya. The image above depicts the ice cap and surrounding terrain on 3 November, thanks to NASA & USGS! Contrast snowcover on the ice cap last week with that shown below on 16 September.

Telemetry of snowfall measurements from the Quelccaya AWS shows that about 6 cm of additional ablation occurred in the week following when the image below was acquired. Between then and 3 November (see above), the AWS recorded 32 cm of snow accumulation - which very likely indicates that the next wet season is underway. So, although net accumulation for the 2015-16 El Niño will be much below average, it appears that the event will indeed be recorded at the summit. This may not have been the case if the wet season began later, as is more typically the case.
Posted by admin at 11:07 AM

Email ThisBlogThis!Share to TwitterShare to FacebookShare to Pinterest
Labels: accumulation