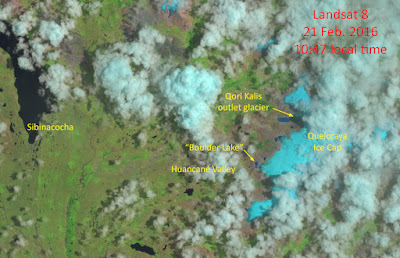 The Landsat image above depicts snowcover at Quelccaya Ice Cap as of Sunday morning (21 Feb. 2016). Despite greater than 50% cloud cover in this scene, the glacier's western margin is mostly cloud-free. Puffy cumulus clouds are likely due to morning convection, which appears rather strong in approximately the center of this cropped section.

With only minor imagination, one can see that the transient snowline is slightly higher than the glacier margin, perhaps by ~100 m elevation. This is not atypical of May or June, but very unusual for February. Darker areas near the margin are likely bare glacier ice of the ablation zone. After decades of strong thinning (check our open-source manuscript on this, in review and available here), the albedo of this ice is low due to dust concentration, enhancing ablation through a positive feedback loop.

So why do we not see more snow on the glacier this year? With the very strong El Niño underway, snowfall at Quelccaya has been much below normal. At the time of the image above, accumulation for 2015-16 was only 67 cm at the summit. Compare this to the 21 February median of 1.59 m (2005-15), demonstrating how anomalous this year is at a location with typically consistent accumulation. With only approximately 4-8 weeks remaining before the dry season typically begins, it appears that 2016 could be a year of very negative mass balance at Quelccaya.

[UPDATE 3/9:  The impact of this current El Niño at Quelccaya appears to be even greater than anticipated, with the snow surface height now lowering while still within the wet season, due to a combination of anomalously low snowfall, 'settling' of earlier accumulation, and ablation. As of yesterday (8 March) snow depth was 34 percent of the 2005-15 mean for the date, which is 1.76 +/-0.12 m (2 sigma). The current depth is considerably less than last year's dry-season lowering, reinforcing the idea that mass balance at the summit may be negative this year. We have no evidence this has ever happened before at Quelccaya!]
Posted by admin at 4:17 PM