Measurements of all four radiation terms have just been processed for June 2010 to July 2012 - the period over which a Kipp & Zonen CNR4 operated at the station. This is an exciting milestone, for working with such data from an extreme-environment AWS is not trivial; riming, snowfall, and intense solar radiation all influence measurements and necessitate adjustments. More importantly, radiation balance fluctuations considerably influence mass balance at the site, and processes of ice core development.

So for a quick overview, the lower plot below shows monthly mean values for 2010-11 (left bars, blue line) and for 2011-12 (right bars, dark blue line). Net solar is shown in orange, net longwave is red, and the lines are net all-wave radiation. Note a clear seasonality to both net shortwave and net longwave, and the relative accordance of monthly values for both years. At 14°S latitude, solar irradiance at the top of the atmosphere is most intense in February and least so in June, yet halfway through the atmosphere on the glacier, the seasonal pattern differs for both incoming and net solar. The seasonal cycle of net longwave radiation broadly mirrors that of net solar, with the greatest energy loss during months of high solar gain.

The upper plot is a timeseries of snow ablation and accumulation for the two years, June through May. Plotting the datum for each year relative to the annual minimum surface height at the station highlights differences in the timing of height changes.

The snow plot provides an valuable context to account for the observations above. The dry season on Quelccaya is typically May through August, when incoming solar radiation is relatively low, yet increasing dust concentration lowers albedo - and thus net solar receipt. Clear skies result in dramatically less longwave energy from the atmosphere than is lost from the snow surface. The transitional periods between seasons are very important to the energy balance, as shown by the contrast between a year when the dry season lingered (e.g., 2010 blue line) and the following year (dark blue line) in which a snowfall event buried the dry season surface by mid-September. With continuing clear sky and relatively darker snow in 2010, net solar irradiance averaged roughly 50 W/m^2 higher through September, easily offsetting the greater net longwave loss (due less cloud cover)! Without a substantial snowfall event until the end of November, and incoming solar radiation seasonally increasing rapidly each day, 2010 ablation (blue line) during these months was considerable relative to June-August, and the transient snowline likely reached a high elevation on the glacier. Unfortunately, suitable Landsat scenes for that year have not been identified after mid-September (Hanshaw and Bookhagen, The Cryosphere Discussions, 2013).

During both years shown, snow accumulation was greatest during February. Cloud cover and fresh snow likely account for low values of both net solar and net longwave radiation. Lastly, the snow plot illustrates that the 2011-12 wet season (dark blue line) ended earlier than the prior year (i.e., March), as also indicated by higher net solar and longwave radiation during March.

Also essential in understanding the Quelccaya energy balance are turbulent fluxes of sensible and latent heat. Along with estimating the radiation balance for the entire period of record at the site, efforts to determine these energy fluxes continue. The objective is quantifying the magnitude and timing of mass flux due to melting and meltwater percolation, which profoundly influences all aspects of the ice core record. 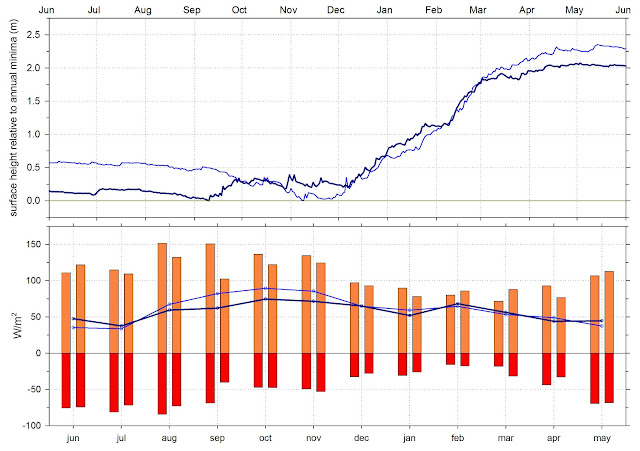