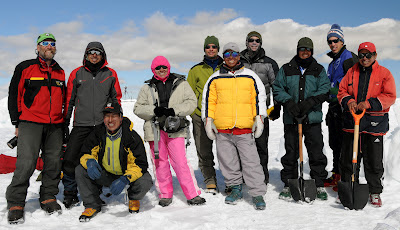 Fieldwork in 2011 was productive, interesting, and fun. We began in Cusco at the end of June, meeting up with several collaborators before departing for the Cordillera Vilcanota. Our first night out was at only 4,400m, yet accumulating snowfall began as we were putting up the tents. Although snow at lower elevations melted quickly, high wind and blowing snow during our first couple days on the glacier made work nearly impossible. Fortunately, sufficient time was budgeted to get everything done, and during 6 days at the summit we raised the weather station tower, serviced existing and added new instrumentation, and conducted snowpit measurements. Joining us in camp for some of the time were Lonnie Thompson, Henry Brecher, Keith Mountain and others, which was great.

Many aspects of the field season are depicted here, beginning in Cusco. Above photo courtesy Keith Mountain (Univ. Louisville).
Posted by admin at 12:37 PM